Frictional force opposes motion and–in one form or another–impacts our daily lives. From a global perspective, different types of friction combine to consume approximately 23% of the world’s energy. The resistance that occurs through friction results in drag, causes parts to overheat, and increases wear on surfaces. Wear-related failures consume energy because of the need to replace parts and equipment. Less water friction not only means energy efficiency, but also lower operating costs.

Using pumps as an example, fluid friction opposes the motion between a liquid and the walls and mechanisms within the pump. Any increase in fluid friction affects the pump performance and eventually causes wear.

All types of fluids flow easier if the internal resistance to flow—or viscosity—remains low. Even though water has lower viscosity and produces less fluid friction than thicker liquids, water moving at higher speeds or at higher temperatures introduces friction and resistance.

In addition to those factors, water also has specific flow properties that depend on cohesion and adhesion. Cohesive forces occur through the attraction of water molecules to other water molecules while adhesive forces allow liquids to latch onto pipe and pump surfaces.

Water also has a very high surface tension or the force that resists breaking the surface of a liquid. The bonding of two positively charged hydrogen atoms in one molecule to one negatively charged oxygen atom in another molecule creates tension as the molecules contract to the smallest surface area and resist breaking. Any increase in cohesion leads to a proportional increase in surface tension and decreased flow.

The term “laminar flow” describes how flowing water breaks down into a series of concentric layers that move at different speeds.  Water flowing within a pipe has the greatest velocity in its innermost layer. As the layers move farther from the center layer, each has a progressively slower velocity. The outer layer contacts the pipe surface and has no velocity. Friction increases between each layer throughout the stream of water and a portion of the kinetic energy found within the flowing water dissipates into heat energy.

As water flows through a pump, the pumping action increases fluid velocity and mixes the laminar flow layers into vortexes and eddies that define turbulent flow. Water moving at higher speeds causes instability within laminar flow. Increasing the speed causes the transition from laminar flow to a combination of laminar and turbulent flow and finally to turbulent flow. Rather than velocity occurring in the direction of flow, velocity develops in different directions.

The Quality of Your Water Impacts Energy Use

The quality of water varies according to hardness and the presence of dissolved minerals, particulates, germs, and bacteria. Referring to the table, the amount of dissolved calcium and magnesium in water determines its hardness.

Soft water has only one sodium ion and contains a very low amount of dissolved minerals. Although rain water falls as soft water, it only remains soft until filtering through soil and rock. The solvent chacteristics of water allow it to absorb and hold the larger quantities of calcium and magnesium ions that increase hardness. As a result, the hardness of naturally occurring water supplies varies according to location.

Along with containing minerals, water may become contaminated with particulates, bacteria, parasites, chemicals, and germs. Contamination of water supplies may occur because of the introduction of wastewater into supplies, run-off from land into streams or rivers, natural deposits, poor water management, or the improper disposal of pollutants.

Cooling towers used for an industrial system serve as an example of the impact of hard water. During cooling tower operation, an air conditioning system pulls the heat generated by process equipment and transfers the heat to a chiller water system. The chiller transfers the heat from the chilled water loop to a condensor water loop.  With hot water flowing into the cooling tower distribution system, nozzles spray the water through fill material to begin the evaporative process that extracts and dissipates the heat into the atmosphere. 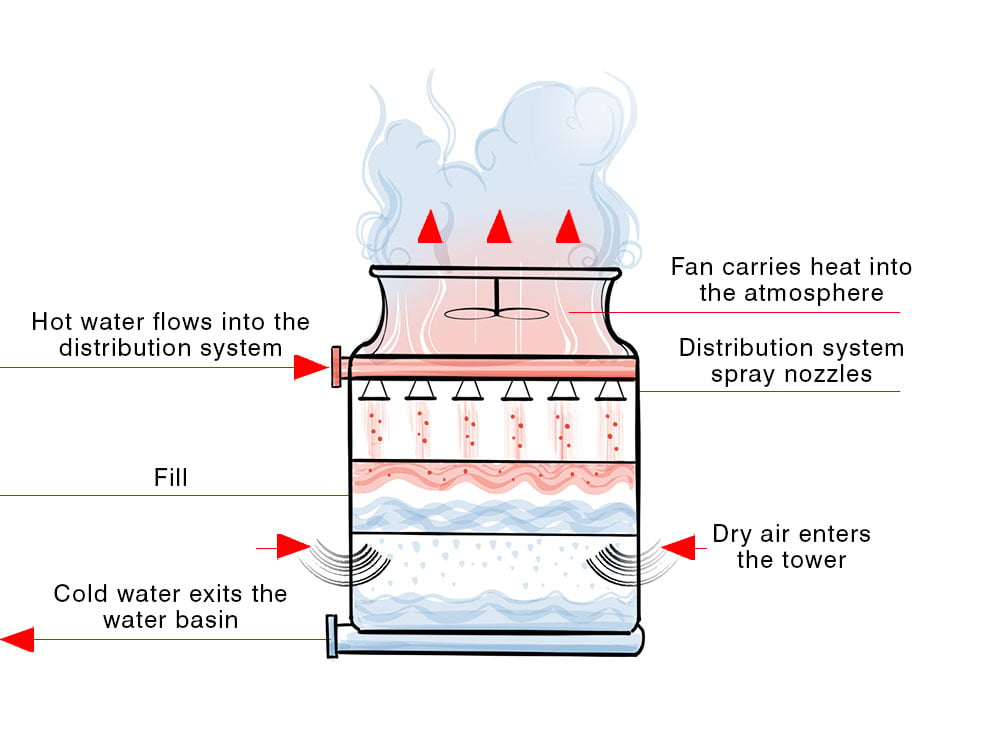 Hard water scale and contaminants can collect in the tower collection basin and degrade pump impellers and allow scale to form on surfaces used for heat transfer or clog spray nozzles. The biofilm and bacteria that accompany the contaminants cause foul odors and heighten the risk of spreading infectious diseases.

The hard water scale also decreases the energy efficiency of the tower. Scale residing in the fill material slows the amount of air that the fan can pull to cool bulk water. To overcome the scale, the fan pulls harder and requires more energy to operate. To compensate for the loss in heat transfer capacity, the system also uses energy to pull in more cooling water. With each part of the system using more energy to meet efficiency demands, wear on equipment increases and components fail. The failure of the system or components also requires additional energy to recover from downtime and to restart the system.

Changes in the acidity of water or pressure allow the buildup of calcium carbonite, calcium sulfate, strontium sulfate, barium sulfate, silica, silicates, and concentrations of minerals that exceed the solubility of water. The term “solubility” describes the maximum amount of a substance that water dissolves at a specified temperature. When water loses solubility and minerals continue to concentrate, water hardness increases and scale forms.

The decrease in solubility allows alkaline, non-alkaline, and silica-based scale to form on surfaces that contact water. Scale deposits in residential, commercial, and industrial water systems restrict the flow of water, plug nozzles, and negatively impact the efficiency of pumps and heat exchangers. The accumulation of scale pushes equipment to work harder, increases energy use, and reduces the productivity gained from water use.

Research has demonstrated that water conducts electromagnetic waves and that water passing through a magnetic field forms larger numbers of hydrogen bonds. As more hydrogen bonds form, the physical composition of water changes. Calcium and magnesium ions combine with other ions to pull towards the bulk of water and develop greater surface tension. Water flowing through an electromagnetic field begins the process of exchanging calcium and magnesium ions for sodium ions that have a lesser pull. The exchange of ions lessens the hardness and surface tension of water.

Reducing surface tension allows water to form a thin, low-friction layer on a surface. The low friction between the surfaces reduces energy consumption through less heat loss and wear on components.

Along with changing the physical and chemical properties of water, magnetism also removes scale from cooling towers, pipes, and heat exchangers. Applying an electromagnetic field to surfaces dissipates scale into fine particles that wash away with water flow.  An applied electromagnetic field also changes the characteristics of calcium carbonite and prevents scale from forming on a surface. Best results occur through a combination of water chemistry, flow rate, and magnetic power.

How to Reduce Energy Consumption with Better Quality Water

Wastewater treatment plants and water distribution systems rely on intense energy use to operate and maintain equipment used for pre-treating, filtering, chlorinating, transporting, and distributing water. Energy consumption depends on factors such as population, water quality, the ages of the systems and equipment, piping distances, and the energy embedded within each wastewater treatment process. Along with having energy-intensive processes, the plants and systems also release greenhouse gases into the environment.

At the same time, Magnation water conditioning systems increase the amount of oxygen and the water becomes less dense and more transparent. Each factor reduces the need for energy.

A carbon footprint measures carbon dioxide and carbon compound emissions used when consuming carbon fuels. The footprint also depicts the amount of absorbtion and filtering needed to handle carbon waste and to avoid accumulating carbon in the atmosphere. Wastewater treatment plants may have larger carbon footprints because of electrical energy use and the emissions of carbon dioxide and nitrous oxide when treating sludge. 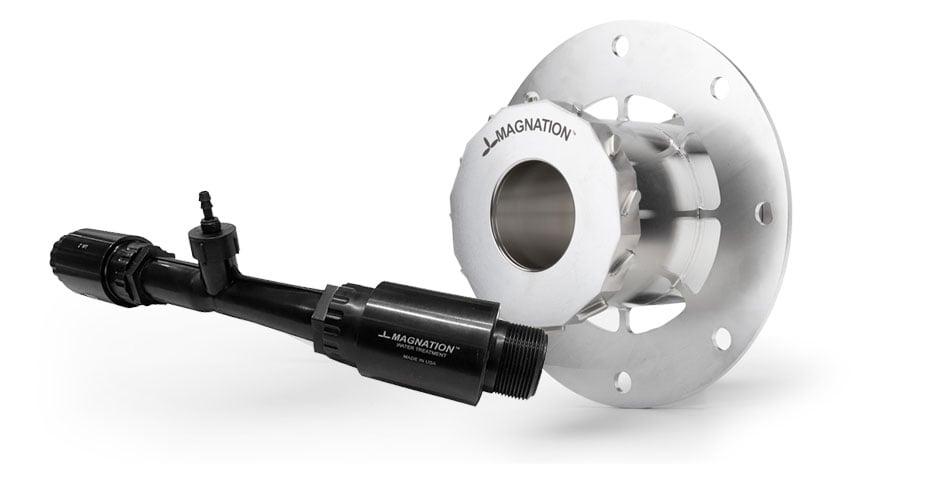 The high viscosity of hard water produces friction that leads to greater wear and tear on equipment and higher energy costs. Magnation water descaling units produce energy savings of up to 40% by reducing viscosity and friction. Physical water scale removal changes the crystal structure of the molecules that create scale. Changing the molecular characteristics causes scale-causing minerals to drop out and adhere to other surfaces. Industrial equipment performs better, requires less maintenance, and has longer service lifespans through use of high-quality, rain-like water. 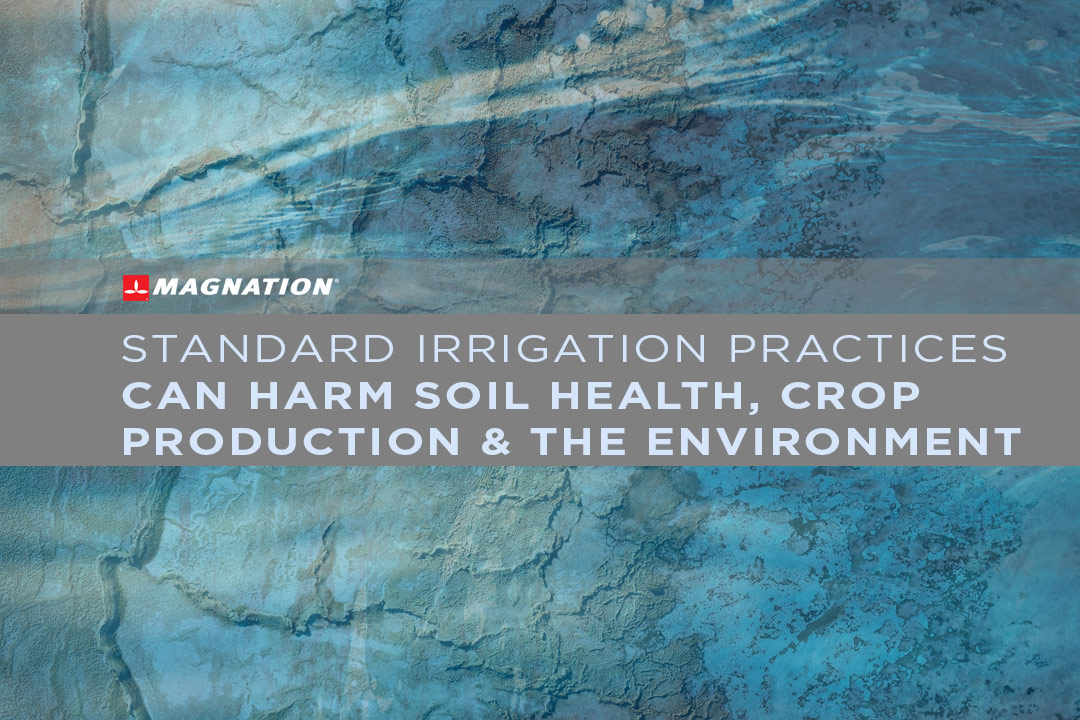